Quick and easy replacements for your homemade desserts

The table is set, the candles are lit, and your dinner is almost ready, giving off an aroma that's impossible to resist. Everything is looking perfect until you realize that you forgot to make dessert. How could you forget the most important part of any holiday dinner? Fear not, for we have compiled a list of 10 incredible store-bought desserts that you can easily pass off as your own.

These limited edition cookies are great chocolate treats to serve, because they’re so new to the shelves that most people haven’t tasted them yet. The cookies feature a strong cocoa flavor with small milk chocolate chips and marshmallow bits. Place them in the microwave for about seven seconds, and serve them with hot cocoa for an after dinner treat.

Did you remember everything for the birthday party except the cake? Don’t worry. This kit comes with plates, napkins, candles, and the delicious cake. The indulgent dark chocolate cake has a white Belgian chocolate drizzle on the top for added flair. You can find this cake at Costco or on Dancing Deer Baking Co.’s site.

Top this Brooklyn cheesecake with fresh strawberries — or, in winter, with thin, layered slices of peeled, seeded orange — for a truly beautiful dessert. A graham cracker crust combines with a rich, creamy filling in this treat. This cheesecake can be found at Costco or on David’s Cookie’s site.

Who has the time to make a Key lime pie from scratch? This Key lime pie finds the perfect balance of tart and sweet, which is combined with a vanilla crumb crust. Top it off with some fresh whipped cream to serve your guests something they might not be expecting this fall.

Whoever thought of combining two of the best desserts, pumpkin pie and cheesecake, was a genius for sure.  Justin’s pumpkin pie cheesecake is filled with creamy rich bites and cinnamon overtones that smell just like fall.

Looking for something quick to serve after Thanksgiving dinner when you haven’t had any time to prepare dessert? Look no further than Marie Callender’s pies. This Dutch apple pie is made with 100 percent Fuji apples, and is baked with a flaky crust from scratch. No one will know that you didn’t make it using Grandma’s recipe.

The coconut movement is still incredibly popular with coconut water and coconut oil taking over the culinary world. Incorporate coconut into your next party by serving this creamy, sweet 3-layer cake with a coconut icing filling. Plate this cake with some blackberries to add some freshness to the sweet coconut bite.

Biting into these soft cookies immediately conjures images of your mom baking fresh cookies when you were a child. The chocolate chunks provide the perfect ratio of crunch to soft cookie. Heat these up in the microwave for a few seconds, so they’re warm and gooey. Serve them on a platter with vanilla ice cream on the side. No one will ever think to question your chewy, melted cookie when they can smell them through the house.

There’s nothing as exciting as the moment your fork touches a decadent chocolate lava cake and breaks open the gooey center filled with chocolate ganache. If you’re not Iron Chef material in the kitchen, just thaw this frozen cake; it's definitely impress-your-family material. It looks homemade, and tastes like something you'd be served dining at a fine restaurant.

This moist banana bread combines natural vanilla, banana purée, and walnuts to create a loaf that tastes like it’s fresh out of the oven. Chop up some fresh bananas and make some chocolate liqueur whipped cream to serve on top of these slices.

this week, i taste tested the dessert offerings of two of the supermarkets here in dc: whole foods and safeway.

at whole foods, there was an ample dessert case with a bunch of mouthwatering choices, but I chose the cutest things on the menu: mini cupcakes with roses on top, and key lime tarts.

here are some crappy shots of them from my cell phone camera:

well, whole foods put a lot of thought and effort into the appearance, undoubtedly to make up for the fact that these were awful tasting. the key lime tarts failed to be tart, with any citrusy snap lost under a pile of oversweet cream.

and the cupcakes were flat out awful. the white icing was tasteless, while the pink icing was vaguely berry flavored, although i detected some notes of flowery soapiness (yes, this could be due to the fact that this was an icing rose, but still). the greatest offense, however, was the fact that the cake itself was DRY. it crumbled apart in my hands, to the point that when i went to throw the food away, i trailed crumbs to the trashcan, like a forlorn jack or jill.

safeway, on the other hand, had nothing that looked as appetizing as the cakes in whole foods. rather, baked goods lie out under industrial lights, manhandled to the point that icing has rubbed off on their plastic containers (which is SO frustrating.)
i picked up a generous 3 inch by 3 inch square of sheet cake for $2.49 – $1.99 with my club card. it was a standard slice of vanilla cake with vanilla icing and a purple, slightly smushed flower on top.

the taste, however, was worlds better than whole foods. it was moist, with the sugary icing tasting of sugary icing. best of all, since i got so much cake, i can squirrel it away for several days, taking a bite now and then when my cake craving returns. count me impressed.

so how does this shake out?
if you’re going to an event where attendees will oooh and aaah over how the cakes looks, but then not really eat any of them, get a whole foods cake.

but if you’re going to hang out with real friends who love food and want to spend hours getting a sugar high on, go with safeway.

in my book, safeway wins every time.

If you are looking for a super easy, no-bake Easter dessert – a pudding and cookie parfait is perfect!  How adorable do these chocolate pistachio garden patch parfaits look?

Not only do these taste delicious – they are incredibly easy to make!  Simply make a batch of pistachio pudding and layer it with crumbled chocolate cookies in a clear glass jar, or any short glass cup you have on hand.

As far as chocolate cookies – you have a couple of options.  You can simply crumble OREO’s for the Chocolate – OREO Thins have the least amount of filling, so those would be good, or the OREO Handi-Snacks that have the filling on the side would be perfect!

Otherwise, I would suggest chocolate wafers, or Keebler Fudge cookies or you can make a batch of Betty Crocker chocolate cookies using the baking mix and crumbling those for the cookie part.

The carrots are made out of marzipan, which is a delicious almond paste that is quite pliable and can be shaped into these gorgeous carrots to top the parfaits.    The carrots are not that time consuming, but you do need to dye two different colors (orange and green) and shape them, so if you are short on time, you can always top with whipped cream and some chopped pistachios.

You’ll have a perfect Easter dessert that you can store in the refrigerator until it’s time to serve.

If you love pistachio pudding, be sure to check out my no-bake Pistachio Cream Pie recipe here.

Pro Tips: 1. Marzipan is an almond paste (made from almond meal and sugar) that is usually found in the baking aisle of the store. It is easy to color with food coloring and create edible garnishes for desserts! 2. No marzipan? Top dessert with fresh strawberries and chopped pistachios instead. 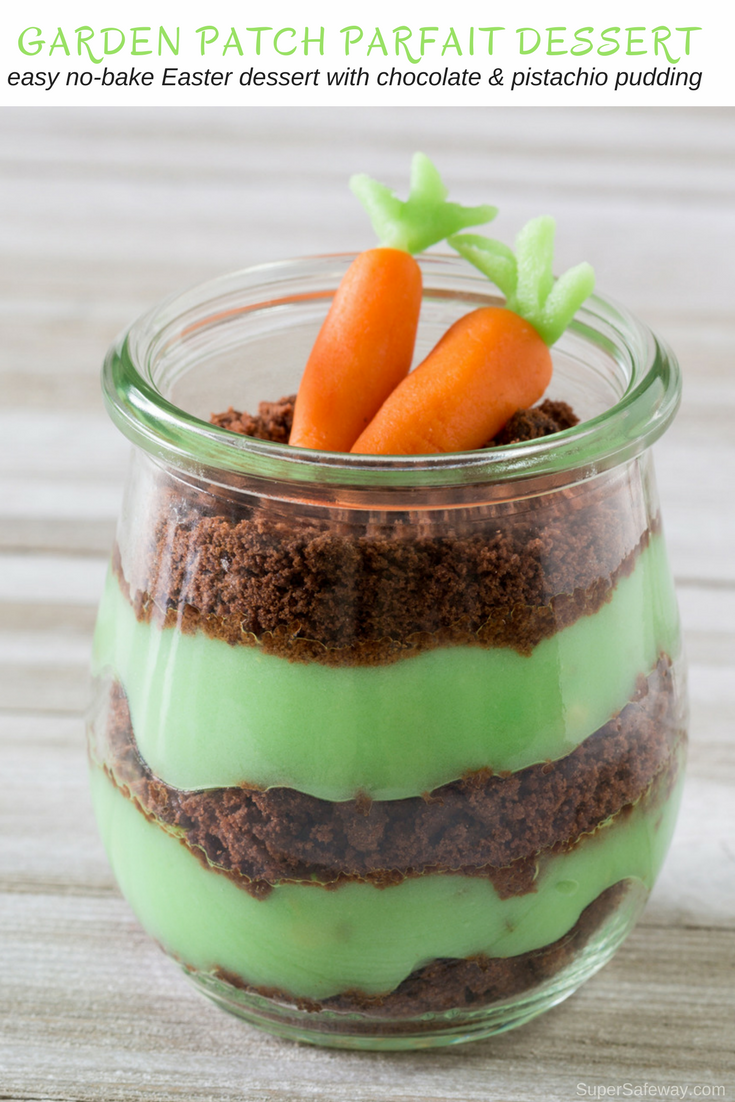 Thanks to our friends at Safeway for letting us share this recipe!

* Please note – Savings information is based on Colorado pricing and the Safeway Coupon Policy for the Denver Division which includes Colorado, Nebraska, New Mexico, Wyoming and South Dakota. Your market may vary. *

Filed Under: Featured, From the Kitchen, Safeway Deals