Molex connector is the vernacular term for a two-piece pin and socket interconnection. Pioneered by Molex Connector Company, the two-piece design became an early electronic standard. Molex developed and patented the first examples of this connector style in the late 1950s and early 1960s.[1][2] First used in home appliances, other industries soon began designing it into their products from automobiles to vending machines to mini-computers.

In such a connector, cylindrical spring-metal pins fit into cylindrical spring-metal sockets. The pins and sockets are held in a rectangular matrix in a nylon shell. The connector typically has 2 to 24 contacts and is polarized or keyed to ensure correct orientation. Pins and sockets can be arranged in any combination in a single housing, and each housing can be either male or female.

In October 1963, AMP (now TE Connectivity) introduced the Mate-n-Lok connector.[3] The AMP connector was similar to the patented Molex connectors but not interchangeable. Both were widely used in the computer industry and the term "Molex connector" is often inaccurately used to refer to all nylon plugs and receptacles.

The first 5.25-inch floppy disk drive, the Shugart SA400, introduced in August 1976, used the AMP Mate-n-Lok connector part number 350211-1.[4] This connector became the standard for 5.25-inch format peripherals such as hard drives and was used until introduction of SATA drives. In 1983, Molex introduced the 8981 connector under the trademark Disk Drive Power Connection System,[5] which was fully compatible with the AMP Mate-n-Lok connector.[6] The Molex 8981 series was only produced in a 4 position option, unlike the Mate-n-Lok family which includes many other contact arrangements.

Several connector types have become established for connecting power in desktop PCs because of the simplicity, reliability, flexibility, and low cost of the Molex design. Certain Molex connectors are used for providing power to the motherboard, fans, floppy disk drive, CD/DVD drive, video card, some older hard drive models, and more. Compatible connectors are available from many manufacturers, not just Molex and AMP. 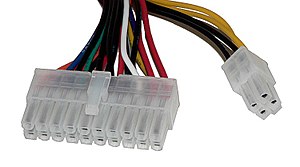 In 20/24-pin configurations, the Mini-Fit Jr. connector may be used on ATX motherboards as the main power connector. The same style of connector, in single or paired 4-, 6-, or 8-pin configurations, may be used for additional CPU power and graphics card power. Power delivery to these devices has increased in successive generations of PC components, as their higher signal sophistication and speed requirements have raised their electrical demands. The Mini-Fit Jr. can also be found in other consumer and industrial electric devices, such as major appliances, with high circuit density and high current requirements.

These connectors are polarized so that they usually cannot be inserted incorrectly. They lock into position using an integrated latch.

Power good goes high to indicate that voltages are stabilised and ready for use. Power on is internally driven high, and shorting this pin to ground will turn on the power supply.

Older, AT motherboards utilized two connectors, commonly referred to as "P8" and "P9" that were positioned directly next to each other. These supplied +5V, +12V, −5V, −12V, "power-good signal", and ground. The most notable difference from modern 20/24-pin ATX power connectors is that the AT power supply connector did not have a signal to turn on the power supply, and also did not supply separate, "always-on" +5V standby power. The power supply was instead turned on and off via a heavy mechanical switch which removed mains power. Modern, ATX supplies, by contrast, are capable of being switched on and off by the computer itself, and the power button is actually a signal that is received by the motherboard and in turn passed along to the power supply. This allows the motherboard to remove power upon shutdown (with the exception of the aforementioned 5V standby power, which is always on), and also to "wake up" the computer by events such as key presses, mouse clicks, "wake on lan" events, and scheduled alarm times. These "wakeup" features are often configurable via the BIOS/CMOS setup.

The desktop computer hard-drive connector is pictured here. It has four conductors, with the standard pinout as follows:

The connector is standard on all 5.25-inch floppy drives, 3.5-inch PATA and non-SCASCSI disk drives; however, newer SATA disk drives employ a more advanced interconnection with 15 contacts. These advanced connection systems were first developed by Molex and other connector companies, often working together to develop interconnection standards. As SATA becomes more prevalent, Molex connectors can be found repurposed, through use of an adaptor, to serve as six-pin PCIe power connectors to make up for a lack of such connectors on a power supply.

Despite its widespread adoption, the connector does have problems. It is difficult to remove because it is held in place by friction instead of a latch, and some poorly constructed connectors may have one or more pins detach from the connector during mating or de-mating. There is also a tendency for the loosely inserted pins on the male connector to skew out of alignment. The female sockets can spread, making the connection imperfect and subject to arcing. Standard practice is to check for any sign of blackening or browning on the white plastic shell, which would indicate the need to replace the arcing connector. In extreme cases the whole connector can melt due to the heat from arcing.

Phobya's connectors are not only about aesthetics, they are also a handy tool to achieve clean cable management! In the modding sector, optical upgrades can be achieved in many ways. Plugs and sockets in a matching design are a great possibility to implement a clean optical design. But this is not the only interesting aspect of replacing the stock connectors. Often the stock plugs and sockets are worn from multiple connections and disconnections, and the Phobya connectors are perfect as a replacement. The peak of cable modding is tailoring the cables to the desired length. This is made easy with these connectors: Simply cut to the desired length and replace both pins and connectors for a perfect finish. Shortened cables also assist in increasing air flow through the enclosure, improving the cooling performance of the whole system. Application for this connector kit: This kit is usually used for power supply of drives, fans, pumps and other devices in a computer.

Disclaimer: This product name has been updated so the gender of the female and male components are consistent with how they are typically referenced in the USA.

That covers the gender part, now about "molex".

Molex is a company that makes hundreds of electrical connectors, many used in computers at various spots. But by far the most common use of the label "4-pin Molex connector" is for a female connector on wires coming out of the PSU. This connector is about ¾" wide with four holes in a straight line. If you look at the end with open holes, you'll see that its outline is rectangular except that two of its corners are cut down at a 45-degree angle. That way it can only fit into the mating male connector one way. This item was used extensively to supply power to IDE hard drives and older 5¼" floppy drives, and later to optical drives. It was so commonly used that other items like fans and LED light strings have used them as power sources, also. So now, even though their original uses (floppies and IDE HDD's) have almost disappeared, you will still find them as one type of power output connector on PSU's. These connectors have one Red wire on one end (+5 VDC), a Yellow on the other end (+12 VDC), and two Black ones (Ground) in the middle holes.

By the way (this was not part of your query) watch out for a source of confusion and trouble. The newer (now also almost outmoded) 3½" floppy disk drives have a slightly different connector for power from the PSU, but it still has the same voltages and 4-pin spec of the original wider Molex. But this connector for smaller floppies is smaller, too, and looks a lot like a 4-pin fan female connector. However, it is normally found on the end of some wires in the SAME group as the wider older "4-pin Molex" outputs. Do NOT ever plug one of these into a mobo fan header - it can damage the fan header circuits!

Motherboards with support for a high quantity of GPU for mining will require additional power on the motherboard through 2x 4-pin Molex ports. Our 6-pin to Molex 4-pin female is an inexpensive and simple solution to get power to these Molex ports on the motherboard if you are not using an ATX power supply. The principal use is to convert riser Molex 4pin power to be used directly on PCIe 6pin power connectors.

This cable can be paired with a Molex splitter to directly power multiple Molex ports on your motherboard.

As pictured, the 5V wires are not included; server power supplies can only push 12V.

Motherboard and other accessories not included. Pictures are for reference only.