Need an unlocked high-end Windows 8 Phone with bigger screen? If so, check out our deals on the Nokia Lumia 1520. The phone is the most advanced and the largest smartphone that has been manufactured by Nokia so far (2013). The device comes with a 6-inch Full HD display at 367 ppi, a powerful quad-core 2.2 GHz Snapdragon 800 chip and 2 GB of RAM. The handset’s camera features a 20-megapixel sensor, Carl Zeiss optics, optical image stabilization, auto focus, and dual-LED flash. Moreover, the Nokia Lumia 1520 is not locked for any carrier, so you can use it with any GSM carrier of your choice such as T-Mobile or AT&T.

Buying Lumia phones from third party vendors is a smart move to get a premium Windows smartphone without contact at a cheaper price. Just be aware. Buying new phones at suspicious low prices may be sometimes tricky. When you shop online, keep few things in mind. You know the rule, you get what you pay for. Before purchasing a phone read few tips below which will help you to avoid common mistakes and purchase your new phone with confidence. 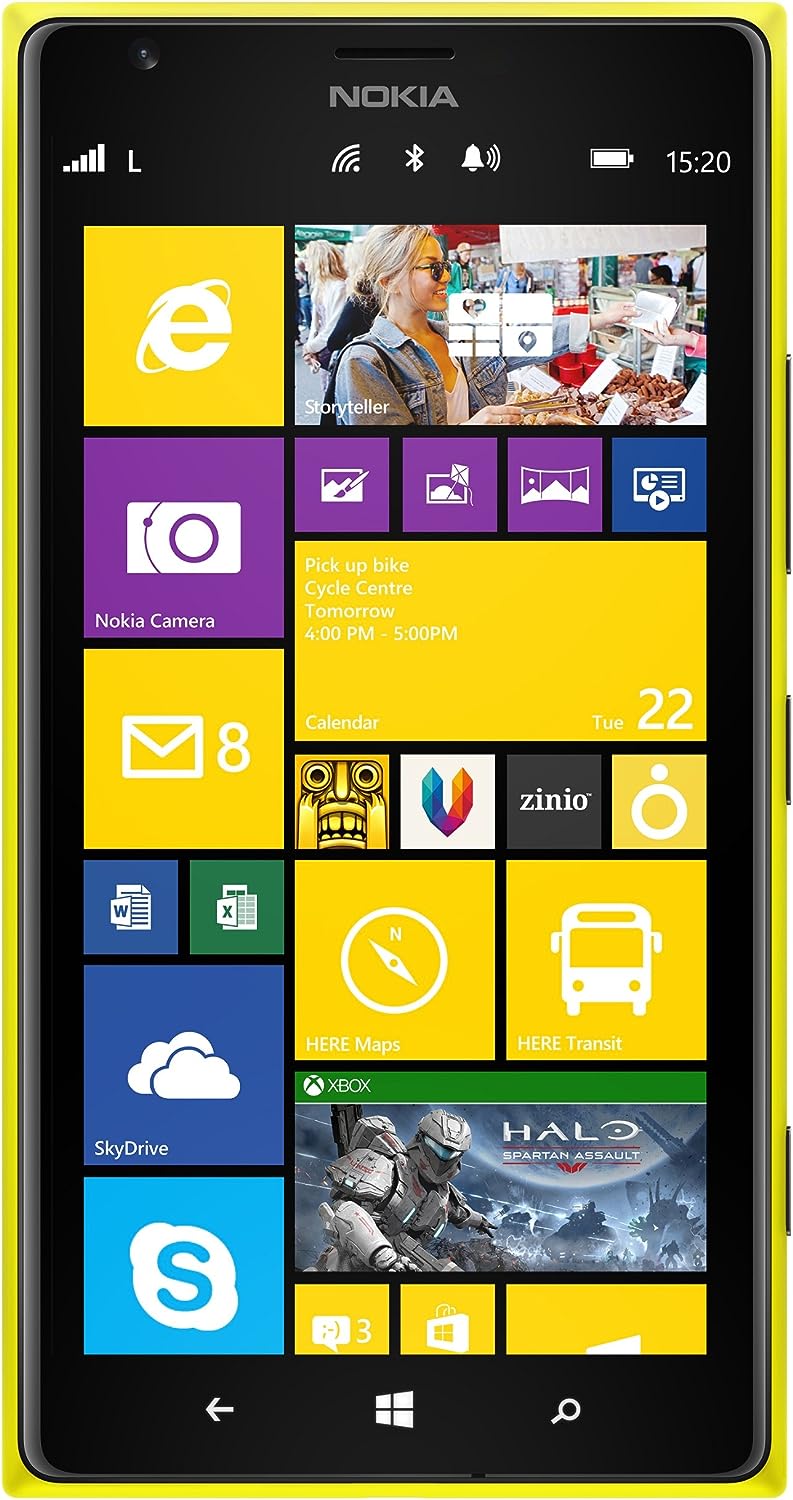 *All items will import from USA

This product is not Fulfilled by Ubuy and can take minimum 10 days in delivery. We might cancel the product from the order and refund you if any issue arise with the delivery of this product.

Note: Electronic products sold in US store operate on (110-120) volts, a step-down power converter is required for the smooth device function. It is mandatory to know the wattage of the device in order to choose the appropriate power converter. Recommended power converters Buy Now.

Very small set of scratches on the back near the bottom of the phone. Minute light scratching on the camera lens but it does not show up in the pictures and does not affect performance.

Its a massive phone

Well overall slow to use all apps👎. Love its super bright yellow and huge screen.

Good phone has a great camera and great battery life but the data on it is kind of slow and app store not that great.

I have had my phone for a year and half.... So far my have dropped my phone multiple time so my scream it alittle messed up. Over all nice phone

This seller was amazing! My phone came on the exact day he said. It was in the original box with all the manuals and charger. I will be buying again from this seller. Thanks so much. I recommend this seller. My Nokia Lumina 1520 yellow works flawlessly! :)

Love this phone! I'm on my 2nd one. I wish Microsoft had kept this one and built its future phone after this one.

I was glad to get my new phone

I was glad to get my new phone. Because it was unlocked, I was able to get service right away.

The Nokia Lumia 1520 was a flagshipWindows Phonephabletsmartphone designed and produced by Finnish telecommunications manufacturer Nokia in partnership with American software manufacturer Microsoft. The device was first announced at the Nokia World event on 22 October 2013 in Abu Dhabi, alongside its mid-range phablet stablemate the Nokia Lumia 1320 and Nokia's 10.1 inch Windows RTtablet the Nokia Lumia 2520.[5][6] Until its discontinuation in the United States on 7 April 2015 the phone served as the flagship device for Nokia's Lumia Series and Microsoft's mobile effort. On 6 October 2015 Microsoft officially announced its flagship phablet successor, the Microsoft Lumia 950 XL, with availability sometime in November 2015.

The device was powered by a 2.2 GHz quad-core MSM8974 Snapdragon 800 system-on-chip with an ARM-basedKrait 400 CPU produced by American semiconductor manufacturer Qualcomm. It was paired with 2 GB of RAM and an AMDAdreno 330 GPU. The chassis was constructed of a highly durable polycarbonate unibody shell featuring the Lumia Series' signature bright colors. International units were available in black, white, red and yellow with a native storage capacity of 32 GB, expandable through a MicroSD card slot that can support up to 2 TB. The American version was sold exclusively through telecommunications provider AT&T, who limited onboard storage to 16 GB but offered an exclusive green color alongside the international colors. Germany also saw a green version with 32 GB storage and bundled apps from Deutsche Bahn, CEWE photo services, Zinio, Max Dome and N-TV.

The screen of the 1520 was an optically-bondedFull HD (1080p) IPS display with 16 million colors featuring Nokia's proprietary ClearBlack display technology. It measured 6 in (15 cm) diagonal with a 16:9 aspect ratio, resulting in a pixel density of 367 ppi. Protection came from a sheet of chemically strengthened CorningGorilla Glass 2. The device shipped with Windows Phone 8 preinstalled and was upgradable to Windows Phone 8.1 Now this device is included on the Microsoft list of Windows 10 Mobile upgrade, it can be upgraded through the Windows Insider program too. The phone had a large non-removable 3400 mAhLi-Ion battery (BV-4BW), which gave it slightly longer endurance compared to its contemporaries from Android and iOS. The rear camera has 20 megapixels, is optically stabilized, and a subsequent software update introduced the ability to film in 4K (2160p) resolution.[3]

Owing to its large dimensions and flagship specifications, the phone was viewed as a direct competitor to the Samsung Galaxy Note 3 and HTC One Max.[7]

Production of the Lumia 1520 has been officially discontinued.[when?]

The Lumia 1520's IPS LCD[11] display is the first Windows Phone display to have a resolution of 1080p, allowing it to have three columns of Live Tiles and is covered with by Gorilla Glass 2. At 6 inch, the display has a pixel density of 368 pixels per inch.[12][13] The phone has a 2.2 GHz Snapdragon 800SoC, and a 20 megapixel PureView camera.[7][14] It has 4G LTE and near field communication connectivity, and comes with 32 GB of built-in memory, with a possible further 2 TB expansion via microSD.[12] At launch the highest capacity MicroSD cards available were 64 GB. MicroSD cards that comply with the SDXC standard top out at 2 TB. MicroSD cards over 64 GB will work as long as they are formatted in the proper file system. The Lumia 1520 has a 3,400 mAh battery and will be compatible with a US$99 DC-50 wireless-charging plate,[12] with the phone itself to have a price of US$749.[14]

Like the Lumia 1020 it takes a shareable 5Mpx picture and a 16Mpx picture that can only be accessed by attaching the handset into a PC,[15] but only has 1/2.5" sensor size. Capable of 2x data binning lossless compression for taking photos and 4x for taking videos.[16]

Tom Warren from The Verge has praised the phone for its display, speed and camera, but noted the lack of stylus support and its size makes it difficult to use one handed.[15]

Andy Vandervell from TrustedReviews wrote: "The Lumia 1520 is a watershed phone in many respects. It brings Windows Phone hardware on par with the rest of the smartphone world, but the software still needs a bit of work."[18]

Brad Molen from Engadget concludes: "The Lumia 1520 offers a Windows Phone experience unlike any we've seen before. With its top-notch hardware, fantastic imaging and constantly improving firmware, this is by far our favorite WP8 device."[19]

Upon its release, the 1520 suffered from initial issues that had since been resolved. For example, early users reported a speaker overdrive issue with Windows Phone 8.1 version 5001.[21] Users also reported random reboot issues, which Microsoft tried to address with a software update on 19 March 2014 to no avail but were able to resolve with an update on 19 June 2015.[22][23]

One contentious issue was a supposed design flaw on the device's screen wherein the touch interface digitizer receives signals without user interaction on the touchscreen, resulting in "phantom touches".[24]

At the beginning of this month I wrote that I was back to using a Windows Phone as my daily driver with my SIM-unlocked AT&T Nokia Lumia 1020 running on T-Mobile. I've since found an even better Windows Phone and like my ZDNet colleague, Jason Perlow, I am now a huge fan of the Nokia Lumia 1520, just not the one from AT&T.

I previously evaluated and then rated the AT&T Nokia Lumia 1520 at just 7.5 due to unreasonable US carrier modifications. The Lumia 1520.3 (RM-938) I purchased on Swappa has all the benefits of Nokia innovation that makes this version of the Lumia 1520 currently the best Windows Phone available. Lumia 1520 owners outside the US have known this for quite some time, but it took me a while to figure it out. Given that the upcoming Lumia 930 doesn't have a microSD slot (it is a GSM version of the Nokia Lumia Icon on Verizon), this 1520 may retain that title for many folks too.

The Nokia Lumia 1520.3 has integrated Qi charging, 32GB of internal storage, a microSD expansion card slot, massive 3,400 mAh battery, 20 megapixel camera with Carl Zeiss optics, 6-inch 1080 x 1920 ClearBlack LCD, and quad-core 2.2 GHz processor. It supports 3G and LTE on AT&T and T-Mobile in the USA, as well as other carriers throughout the world.

You can find the Lumia 1520.3 at various online retailers like Negri Electronics, NewEgg, and B&H, ranging in price from $570 to $658. It comes in white, yellow and black.

If I were to review this model of the Lumia 1520, then I would have rated it at 9.5 out of 10 instead of 7.5. It is a bit large, but has everything you could want in a Windows Phone device and is definitely one to consider.

For unlock Nokia Lumia 1520 following options are available. If you don't know which option use for unlock your phone, please contact us. We will help you choose the right product for your phone.

What our customers say about unlocking

1. Turn on the phone with an unaccepted simcard.
2. Enter the simcard pin if it is necessary
3. The phone will ask for a PIN unlock code.
4. Input the code received from(sim-unlock.net).
5.A request to enter a pin code, might appear even 10 times. The code should be entered as long as a message to enter PUK code appears(do not cofuse with simcard Puk code).
6.Once again please input the code receive from sim-unloc.net.
7.The phone is now unlocked.

Can I remove the network blockade by using a free unlock code ?