Now next up for a Streamer-hosted Season 3 event, JGOD is waiting with a pile of money for the top Warzone players around the world.

Over the next week, we’ll see four full days of all-out Warzone mayhem as the contestants battle it out for their share of $100,000. All of the action will be live-streamed for interested viewers, on both JGOD’s channel as well as others. As stated by the host himself, the first day will consist of Pool Play with the first 6 captains going head to head in 2 vs. 2 play.

More details about the rules and format will be revealed at a later date.

At the time of writing, no players have been revealed, but we will update the article once more details have been shared.

Similar to other COD Warzone tournaments, the entire event will be hosted on JGOD’s Twitch channel. However, this tournament will offer multiple viewpoints, as each individual competitor will also be live-streaming their gameplay.

It’s certainly shaping up to be an exciting weekend of competitive Warzone play. Make sure to stay tuned to our Call of Duty page for updates throughout this exciting period of Warzone gaming.

A Warzone streamer on Twitch has been banned from the game and Twitch after getting caught cheating on a live stream. Hacking has been an age-old problem for Warzone, and Raven Software has been trying to deal with the incursion of such cheats for the longest time.

However, with the start of Season 5, things seem to have changed for the better in Warzone. The security defenses seem to have gone up, and as per reports, spoofers can no longer make it back to Warzone.

This means that if a profile gets banned for hacking in one of Raven Software's ban waves, the cheaters cannot simply create another profile and hop back into the game. They get an IP ban that will prevent them from playing the game ever again.

Something similar happened with a Twitch streamer who goes by the name CPTBALDY. Warzone pro and Twitch streamer JGOD posted clips of this broadcaster being asking for an explanation of something that looked like wall hacking.

He more or less implied that this streamer was using unfair means during gameplay. 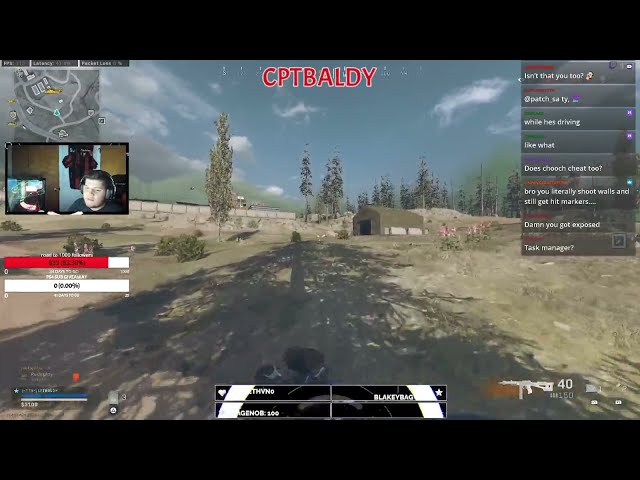 Immediately CPTBALDY's live chat was filled with queries about him hacking, and some even asked him to show his Task Manager.

Unfortunately, an EngineOwning menu popped up on his screen, which clearly showed a menu for aimbots, wall-hacks, and many more cheats. Several of those were turned "on," and although the broadcaster turned it off quickly, the damage was done.

What followed was a chat trolling him for lying about his hacks and a series of quick bans. First, the streamer got banned from Warzone, live on stream.

Next up was his IP ban on Battlenet, which means he can never log back into Warzone, no matter how many profiles he creates.

As of now, even his Twitch account has been banned and cannot be accessed. While there is no confirmation that he has been permabanned on Twitch, the streamer faces all the possible wrath for cheating in online games.

However, legit players will be happy to know that Activision has set forth an anti-cheat mechanic that seems to be working. Here's hoping Warzone will quickly get rid of all the cheaters so that real players can have a good time on Verdansk.

JGOD is an American streamer and gaming content creator. JGOD makes videos based on helping people improve at FPS titles, but typically focuses his content on the newest Call of Duty. The types of videos topics include, but are not limited to: weapon guides, best class setups, spawn guides, subscriber game play breakdowns, news, updates, glitches, patches, and weekly live streams. He started making content for YouTube on August 9th, 2017.

JGOD joined KARNAGE Clan in October of 2018. On November 19th, 2019, he released a video guide on how to destroy the tanks on ground war maps in Modern Warfare. The tanks were absolutely crushing the meta and this was before Warzone existed as another option to standard multiplayer Modern Warfare. Then on July 5th, he released a video explaining one of the most innovative additions to Call of Duty, the Gunsmith, and what every attachment in Modern Warfare actually does. Later on August 17th, he made a video guide on how to improve your aim while playing Warzone and he also explained the fastest methods for unlocking the blue dot reticle. On September 1st, 2020 JGOD released a detailed guide on how to understand Skill Based Match Making or SBMM in both Multiplayer Modern Warfare and Warzone lobbies. Then on October 2nd, he posted a video on the best settings for Warzone season 6. Next on October 4th, he released a video detailing the skills of top Warzone player AverageJoeWo. On February 4th, 2021 he announced on Twitter that he had left KARNAGE Clan. This is a list of JGOD related posts, news, and information.

This is a list of JGOD’s social media profiles on various platforms.

Sours: https://www.invitetogame.com/player/jgod/
Rebirth Island Has Become More Popular than Verdansk - How \u0026 Why Resurgence is Carrying Warzone

Vanguard Weapons are Now Usable in Warzone - How to Use STG/M1Garand \u0026 Are Meta?